BI Indicates That it Will No Longer Raise Interest Rate 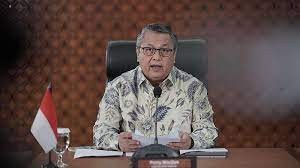 BI Indicates That it Will No Longer Raise Interest Rate. (Photo: MNC Media)

"The decision to raise the benchmark interest rate with a more measured basis is a further step in front loaded, preemptive, forward looking, in ensuring the continued decline in inflation and inflation expectations in the future," said Bank Indonesia Governor Perry Warjiyo in the RDG Press Conference, Thursday (19/1/2023).

Perry ensured that the BI 7DRR increase of 225 bps accumulatively since the beginning of the increase starting in August 2022 to 5.75 percent remains adequate to ensure inflation remains in the range of 3 plus minus 1 percent in the first half of 2023 and consumer price index (CPI) inflation to return to the target of 3 plus minus 1 percent in the second half of 2023.

"Watch our show IDX Channel Official Youtube on the Market Headlines Program, Friday (20/1/2023) with the theme BI Indicates That it Will No Longer Raise Interest Rate. Papua to Export Fish to Hong Kong and Japan